http://behindsofa.blogspot.co.uk/2012/04/amnesty-international-50-years-making.html
Posted by Sofa at 3:38 PM No comments:

Check out this link to their website here for more info http://www.carloslascano.com/carloslascano/amnesty_making.html

Quantic Dream's "Kara" Behind the Scenes

To play this short film click on the image 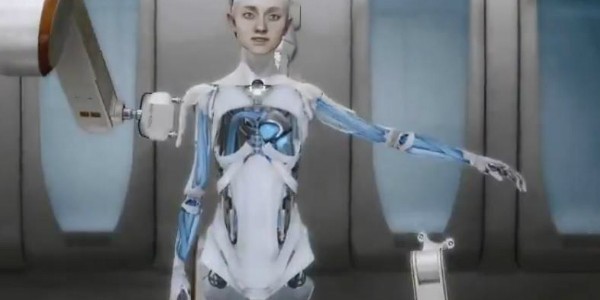 Here is another short Heavy Rain they did years before they made Kara.

Although this doesn't looks amazing. Overall performance is very rough, you can probably pick up a lot of problem in details, but what you can already see is the character is full of emotion and I believe this is the kind of direction David Cage is heading. In his interview he also mentioned, technology to him is not really important, is just a tool, is really how and what you are going to do with it.

By comparing Heavy Rain and Kara we can also see the big improvement after years of experience. Which also kind of remind us although we might be in a very tough situation, but if you insist this is what you wanna do, you will be there in the future.

I think David Cage made the right choice of the actress Valories Curry, she already kind of deliver the emotion needs for the android robot with malfunction during the cast.

I was wondering when Kara was asked to speak and sing in different languages, did Valorie spoken all these languages? I was thinking if I was the director I will arrange a few different actress to speak these languages because it is very hard for a real person to speak in so many foreign languages with native accent which an android super intelligent robot should have the ability to do that. In this video showing  that they are actually using different actress.

As a professional animator I get the chances to work with 100% hand animated character and mo-cap animated character animation. I personally think the way of how they make the character interact with the robot arms in real life action ( a few guys there acting like the robot arms ) is really well done. So that Valorie knows when and how to react on her performances. It actually requires a lot of pre-plan before the actual production started.

Another thing I was really amazed is the acting choices Valories and animators have made. It is hard to see such a great acting performances in a short animated film. There is so much details on each section  from where she started as a full robot behaviour then later on you can start to sense, hmm there is some kind of humanise. Again later on, she became a "human" which was built in different material rather than blood and fresh.

If you pay attention to how Valories plays when she said she was afraid compare to how they tone down the level of the emotion in the final result, I would say that was really well done! Salute to the choice that David Cage made as a director or maybe the animator who was on this scene made the choice :P ( I do that most of the time try to steal my director's job, sorry  Alfonso Cuarón/Film Director, David Shirk/Animation Director and Max Solomon/Animation Supervisor, and me/Animator of Gravity! )

Even-though there is a lot of limitation for animator while working with mo-cap, but we always try to make the best choices to make the film to look great!

below is an interview video with David Cage director of "Kara"

Here is the interview! worth to hear what is in David's brain, it is very inspiring too!

Director - David Cage
Who is a Director, writer and producer. He is also the head of game developer studio Quantic Dream ( this is actually the name of Studio, I thought Quantic Dream's Kara is the name of this short ).

This is a really good live streaming about Performance Art, Check it out

Email ThisBlogThis!Share to TwitterShare to FacebookShare to Pinterest
Labels: Disney's The Sweatbox (2000)